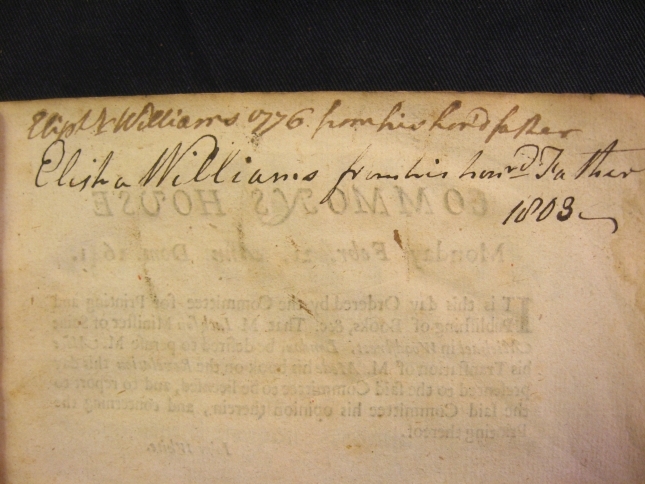 . Pagination is [16] 123 [1] 137 [18] including the scarce ad for other books by Mede. T1 and T2 are separated by a2 and a1 (the ads) out of order, but all are present and complete except for the lacking folding plate. OCLC 13659596, ESTC 006076336. There are the numerous owner inscriptions (the first is dated May 3, 1651) and a stain on two center pages of the book, otherwise clean and unmarked. Paper is toned, book block is fragile but holding. Nice head and tail pieces throughout. This is the 1650 edition of Mede's famous work on the Apocalypse, which predicted the imminent end of the world. The book was a widely influential work on the interpretation of the biblical book of Revelation which was gripping Protestant Christians at the time. The book caused an uproar in the New World. Cotton Mather (1663-1728) contested Mede's claims, and The Rev. Nicholas Noyes (1647-1717) [of the Salem witch trials] "shared his displeasure with Mede's conceit, in his election sermon New Englands Duty and Interest (Boston, 1698) and defended the Puritan experiment in the New World." This appears to be the Rev. Noyes's personal copy of the book upon which this sermon was based. There are two spots where he has written "Nicholas Noyes, his book." There are also notes on the blanks at front and back which are scholarly comparisons of passages in Mede's book to passages in Scripture. If these are Noyes' own notes, they may have been made for Noyes's book New-Englands Duty and Interest" published in Boston in 1698. In it he "agreed with Mede that America was previously a land under the authority of Satan, but he claimed that Christ followed Satan and took possession of America for himself. Subsequently, as a possession of Christ, North America would be included in the future millennial blessings…" On September 22, 1692, Rev. Nicholas Noyes officiated as clergyman at the final hangings of those accused of witchcraftat the Salem trials. Rev. Noyes died in 1717. The book was then purchased on June 1, 1719 by Richard Jaques, who was married to Judith Noyes, the judge's cousin. In 1723 the book passed to Solomon Williams (1700-1776). Solomon was the brother of Elisha Williams, rector of Yale College, and he was also the father of William Williams, signer of the Declaration of Independence. Next was Rev. Elphalet Williams of East Hartford (1727-1803) who received the book "from his hon'rd father" in 1776. Elphalet was the son of Solomon and brother of William Williams. In 1803 the Rev. Elisha Williams of New Hampshire (1757-1845) received the book "from his hon'rd father" (Elphalet). There are some additional owner inscriptions that we cannot decipher but it appears to have passed out of the Williams family after Elisha's death in 1845. An important book in Protestant theological history with wonderful American provenance. ; 8vo 8" - 9" tall; 294 pages; Signed by Collection of Signatures

Title: The Key of the Revelation Searched and Demonstrated out of the Naturall and Proper Characters of the Visions. The Second Edition in English whereunto is added A Conjecture concerning Gog and Magog by the same..Nicholas Noyes copy. Salem Witch Trials, Declaration of Independence With Reverence for the Word Medieval Scriptural Exegesis in Judaism, Christianity, and Islam The Apocalypse of St. John, Or of the Rise, Progress, and Fall of the Church of Rome; the Inquisition; the Revolution of France; the Universal War; and the Final Triumph of Christianity. Being a New Interpretation The Text of Revelation A Revised Theory