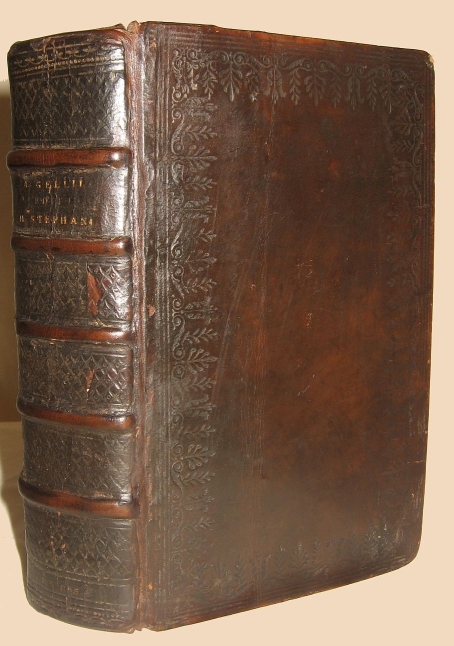 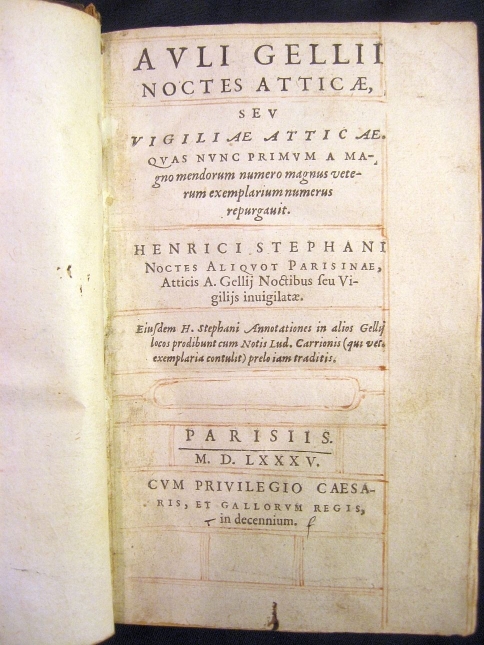 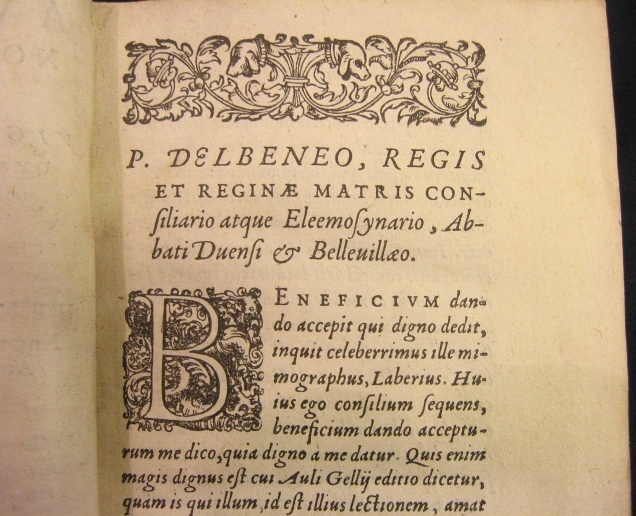 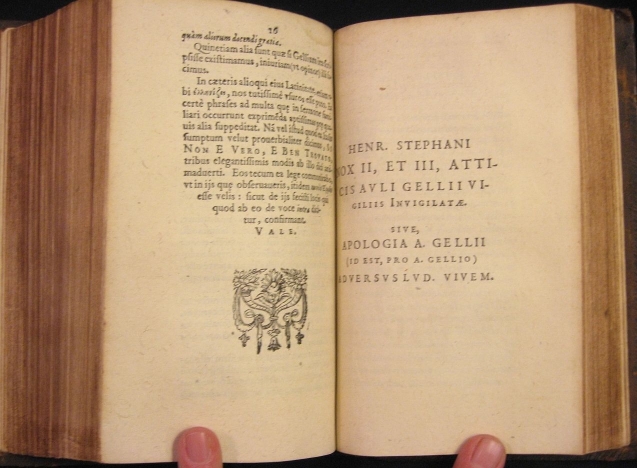 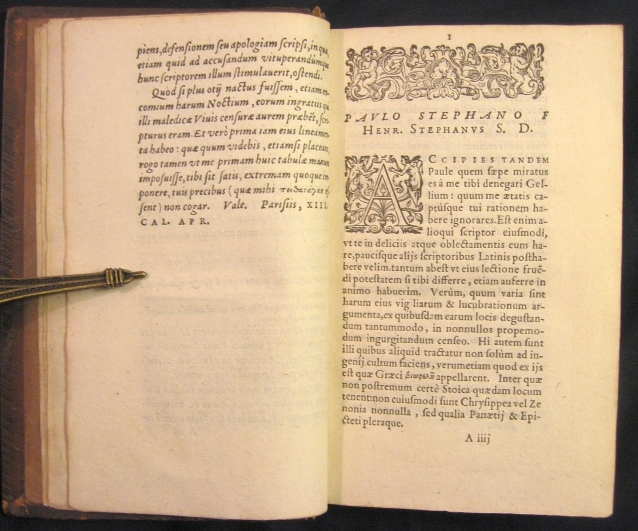 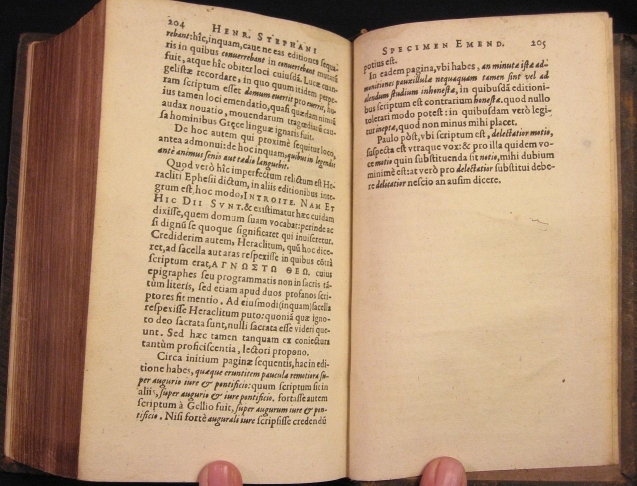 This book is bound in full leather; it is complete, with pagination as follows: [6] 23 [1 bl. 3 1 bl.] 587 [1 bl. 74 2 bl.], 16 3 1 bl. 205 [1 bl.] pp. Dark smooth leather with attractive blind stamping, spine appears to have been beautifully repaired. Renewed endpapers, a book plate on the end paper and a red stamp plate on the verso of the first free endpaper, title page has red ruling, a black ink mark at bottom, text clean and unmarked, some quires more browned than others (as is common with this edition), minor foxing but otherwise quite nice, binding strong. This is the very scarce and important early 1585 imprint, bound in full handsome calf, the so-called Stephanus edition of the classical Roman author Aulus Gellius, a fascinating collection of anecdotes of ancient world on everyday life as well as history and philosophy, with beautifully engraved initials and head and tail pieces -- and something of a bibliographical mystery. . According to the bibliographer Dibdin, this book was printed at the instigation of the famous Parisian printer and classicist Henry Stephanus, and although for years it was also attributed to his printing house, the real printer is still unknown. In addition to the complete works of Aulus Gellius in 587 text pages, it includes a separate 205 page book, separately numbered, of Stephanus' detailed notes on Gellius., which are of considerable value.The title page of the book indicates that notes of Ludovic Carrionus are appended but, as in most extant copies of the work, they are not (they were apparently only included in a few copies at the end of the print run). This edition of Aulus Gellius was printed after a two-year period during which no Estienne edition was printed at all, owing to his ambitious works on Thesaurus and Plato which nearly ruined the famous printer. 'The second part of the volume consists of Estienne's valuable commentary on 7 books of Gellius... Estienne has provided his text and the various parts of his commentary with several dedicatory prefaces, addressed to various prominent French magistrates...the longest and most interesting preface, however, is addressed to his son Paul. This famous preface is the most important autobiographical document Henri Estienne has left to us, and gives us our only glimpse into his father's household' (Schreiber). It is a rare and esteemed book, called at the Pinelli sale "Liber admodum rarus", WorldCat (OCLC) lists only 14 copies held worldwide; 8vo 8" - 9" tall 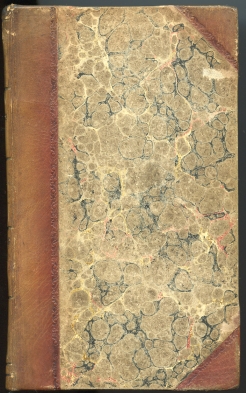 North-west territory Reports of progress : together with a preliminary and general report on the Assiniboine and Saskatchewan exploring expedition, ... from the provincial secretary, Canada

Friends in Council: A Series of Readings and Discourse Thereon. Book the First

Night Thoughts, on Life, Death, & Immortality. To Which is Added, a Paraphrase on Part of the Book of Job; and the Last Day, a Poem 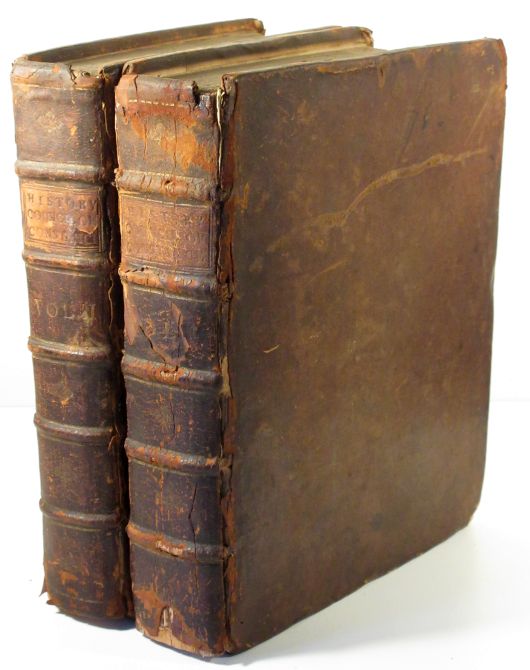 The history of the Council of Constance. 2 Volumes Translated from the new edition, printed at Amsterdam, which the author not only revis’d and corrected, but considerably augmented.