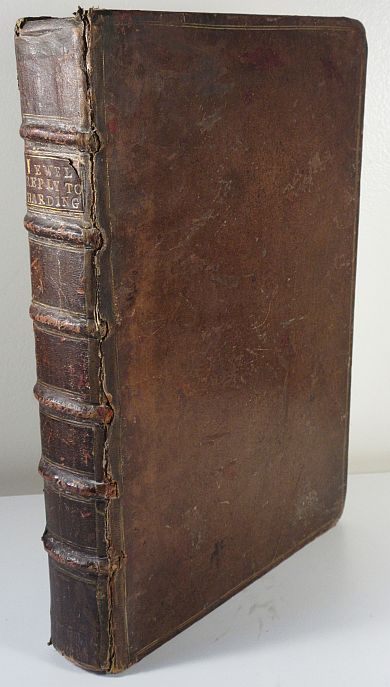 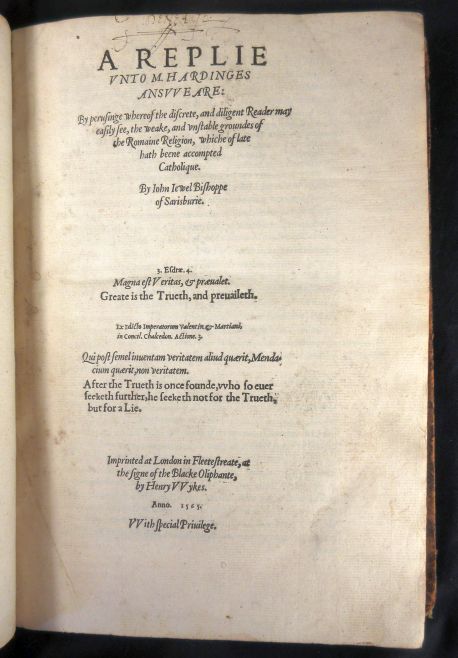 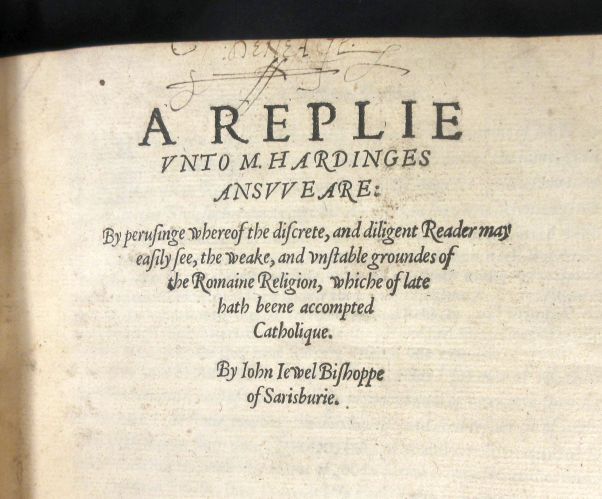 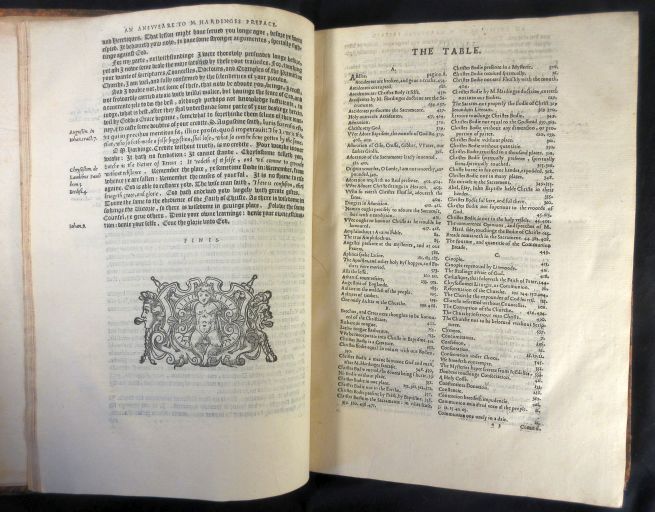 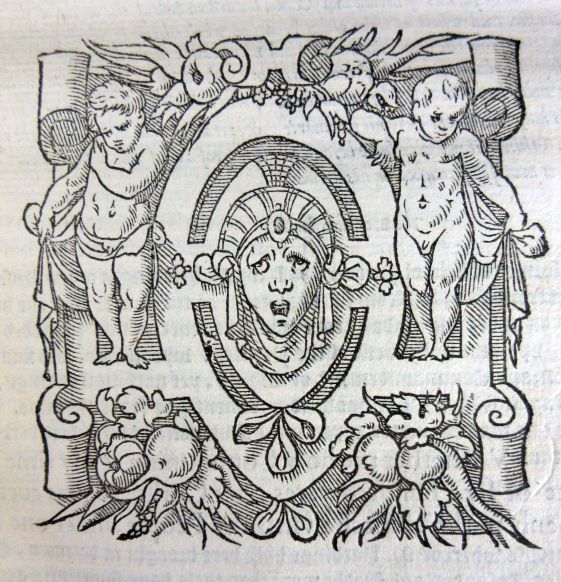 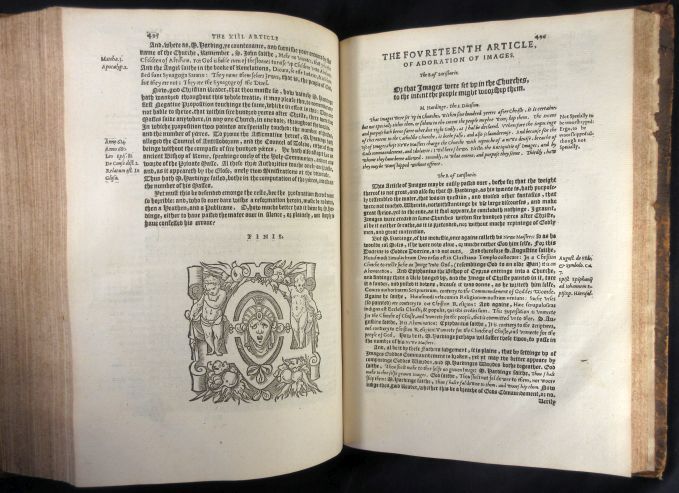 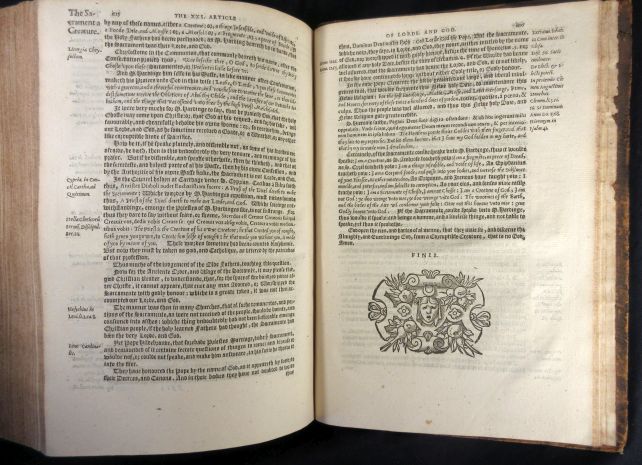 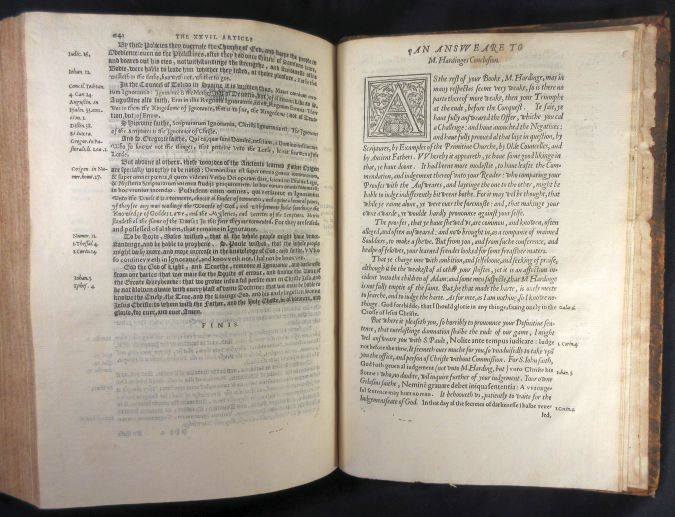 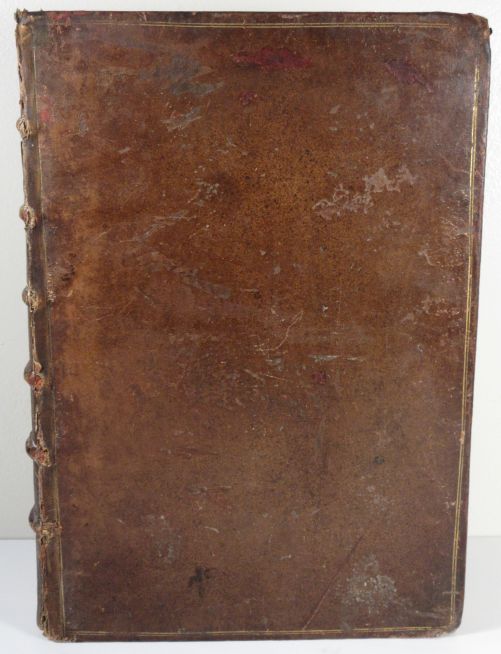 By: Jewel, John, Bishop Of Salisbury

[24], 212, 212-523, 526-641, [12] pp. Text does not follow from 523-526 as per STC 14606. Marked "collated as complete" by Bernard Quaritch on the inside back cover. Small folio in brown calf. First edition with the signature of Sir Thomas Heneage, the Groom of the Stool for Henry VIII and a member of Queen Elizabeth's Privy Chamber. It was reported that the Queen flirted with Heneage, causing Elizabeth's favorite, Robert Dudley, to become jealous. Heaneage died in 1595 and was buried in Old St. Paul's Cathedral where his grave was destroyed in the Great Fire. There is now a monument mentioning him in the rebuilt cathedral. In good antiquarian condition with some scuffs to the leather, hinges cracking but holding. Woodcut initials and tail pieces. Mostly black letter throughout, with some italic and other typefaces. Small section of Ee1 corner torn away just touching text. Some marginal humidity staining at the bottom of the first few pages, occasional small marks and stains but text is mostly clean and quite crisp. Bookplate at the front looks to be. E. ? ? H. Lloyd (the bookplate is mentioned in the American Antiquarian Soc. Bookplate list with the same confusion. ) Heneage's signature at the top of the title page was trimmed when the book was rebound in the 17th century. This is an interesting Elizabethan first edition. Jewel (1522-1571) , the Anglican bishop, was arguing against Thomas Harding (1516-1572) , a Roman Catholic priest, about the case for the Church of England in what would become known as The Elizabethan Settlement. "The Elizabethan Religious Settlement is the name given to the religious and political arrangements made for England during the reign of Elizabeth I (1558–1603) that brought the English Reformation to a conclusion. The Settlement shaped the theology and liturgy of the Church of England and was important to the development of Anglicanism as a distinct Christian tradition." This book was part of a furious war of words between theJewel and Harding and it is especially interesting that it was owned by a member of King Henry VIII's and Queen Elizabeth inner court, the people most concerned with the argument being made. A nice copy of a book quite rare in commerce, an early Elizabethan English printing dealing with the Elizabethan Settlement, in black letter, with the provenance of one of King Henry and Queen Elizabeth's closest courtiers. ; Folio 13" - 23" tall; 641 pages

Publisher: London, Henry Wykes, At the Signe of the Blacke Oliphante: 1565 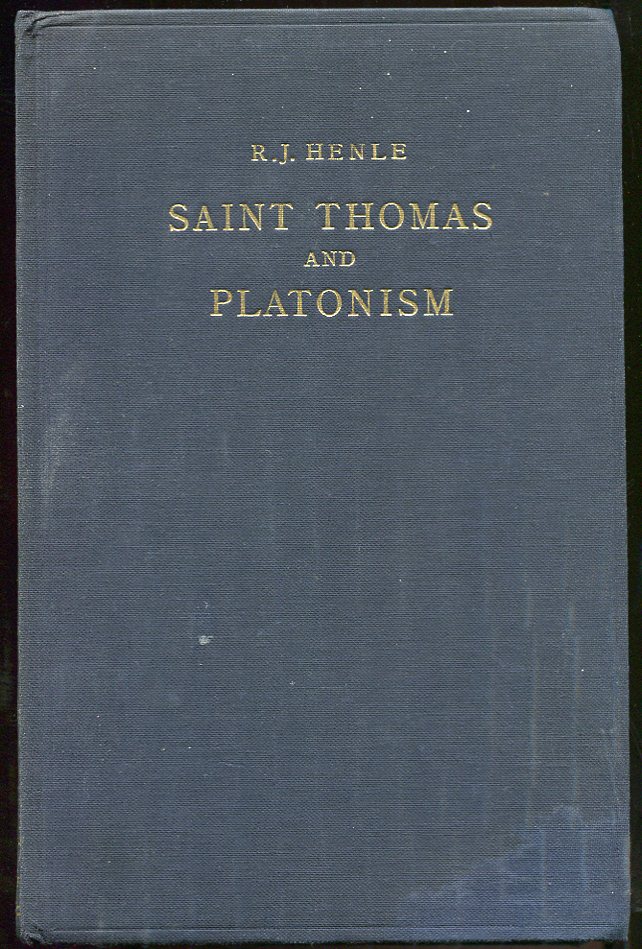 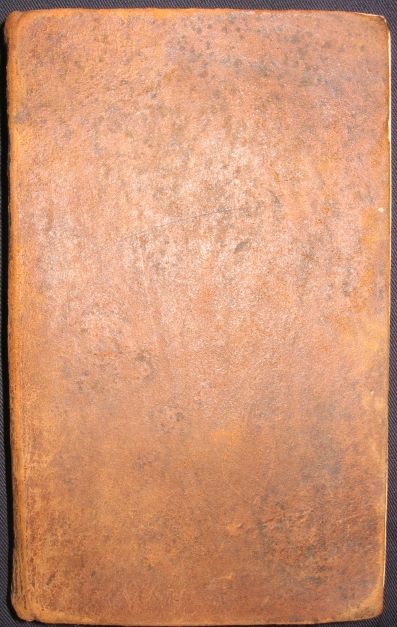 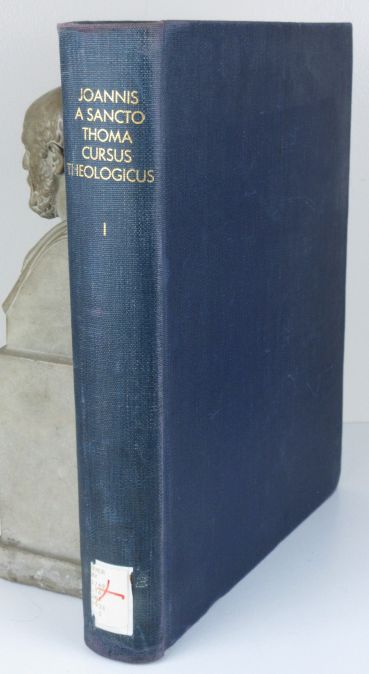 The Theatre of the Greeks A Series of Papers Relating to the History and Criticism of the Greek Drama. Presentation Copy. Signed by Leonhard Schmitz

Echoes to the Amen Essays After R.S. Thomas